After spending the rest of the Hilton Honors points for splendid two nights at Hilton Foshan, we had to return to backpackers reality. To forget being upgraded to a suite, having free breakfast and access to the lounge as a gold member. The cheapest way to Hong Kong was by ordinary train from Guangzhou to Shenzen Railway Station at Luohu where we could easily cross the border on foot.

We had bad luck that day as our train from Guangzhou was delayed. The information panel did not display exact departure time and boarding gate. After 20 minutes of delay, the gate appeared together with the departure time in 5 minutes. We ran to gate six just to find out nobody there. So we hurried to the main gate on the ground floor where we realised our train was gone for good. We’ve never found out where was the problem and we had to go to a ticket counter to solve it. Luckily, there was a lady with an Australian passport just in front of us in the queue. Means she was fluent in English as well as in Chinese! With her help, we exchanged our tickets for the later train. Unfortunately, we had to pay 80 CNY price difference for the modern commuter instead of our original old hard seater.

We followed a good advice and had a dinner on the Chinese side. As we saw later, it was tastier and much cheaper than in HK. Crossing border was easy. From the train station we followed the signs to Hong Kong, and in ten minutes we reached Chinese checkpoint. We filled China leaving form and just after that more or less the same HK arrival form. There is an MTR station on the HK side with an ATM and selling point for Oyster card, which makes travelling very convenient. The only surprise was almost 50 HKD fare from the border to the city centre. Knowing all the hassle and cost, direct bus or ferry from Foshan to HK would be probably a better option.

Hong Kong was exactly as we expected. A bustling city full of life, people, double-deckers, parks and green hills. We found our home in perfectly located YesInn Causeway Bay (dorm 160 HKD pp). We did all the regular stuff that tourists must do. Taking Star ferry across the bay at night, followed by the light show from Kowloon. Taking a bus to the Peak, exploring Victoria Peak Garden and going down on foot. Spent time by hanging around Central and travelling by double-decker train. Since Hong Kong is not just a city, we also hiked to Big Wave Bay Beach from Chai Wan station. After two months of our travel, we first time changed to swim shorts and jumped into the water. Beach was beautiful, but the water wasn’t crystal clear and calm – to remind us of the weather that was coming. 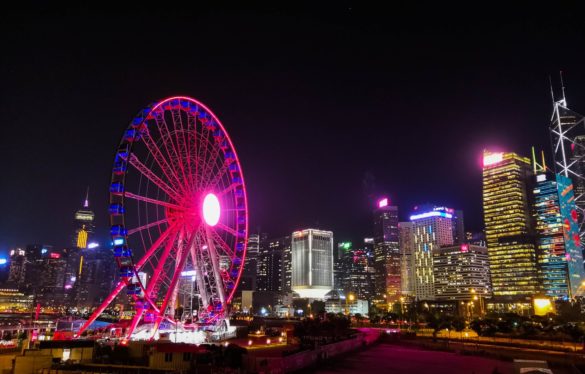 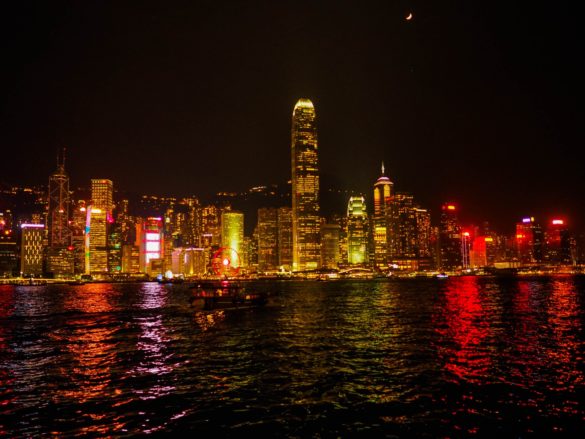 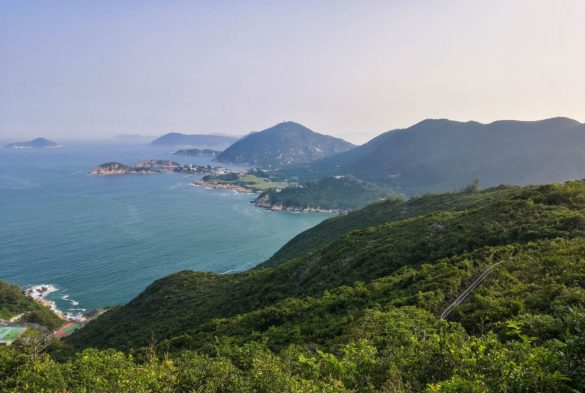 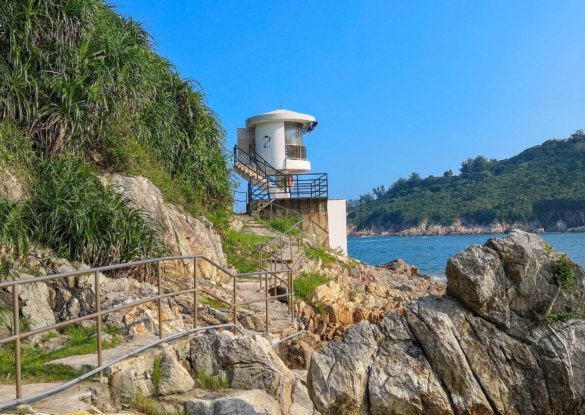 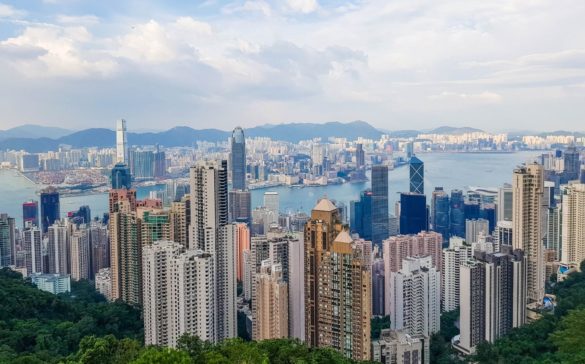 Something went wrong with the weather this year. Our flight to Osaka was cancelled due to the damages caused by the storm Jebi, and we had to find a new ticket and stay one day longer in HK. It turned out to be very good since our original flight would be cancelled anyway due to Mangkhut and we would get stuck at the airport. Due to the typhoon, the city was undergoing intensive preparation. Warnings for residents were quite considerable, especially because of the damages which it caused in the Philippines. We managed to buy some groceries for two days even though all bread, fruit & vegetable, bottled water and some other basic stuff were sold out.

The D day started only with rain, which was good for us because we had to move to another hotel for the extra night. YesInn was unfortunately full. We jumped into the metro that was still in operation (with only a few passengers compared to usually busy mornings) – we were worried because we had to cross the bay and metro was the only option that day. Thirty minutes later, going out of the metro, massive rain and wind welcomed us. We even had to return to the vestibule and find another exit because typhoon got already so strong that it was not possible to safely cross the park and street to our guesthouse. No need to mention that we knew the address but we could not find it for the first 20 minutes, which is enough time to get totally soaked and randomly threatened by flying stuff. 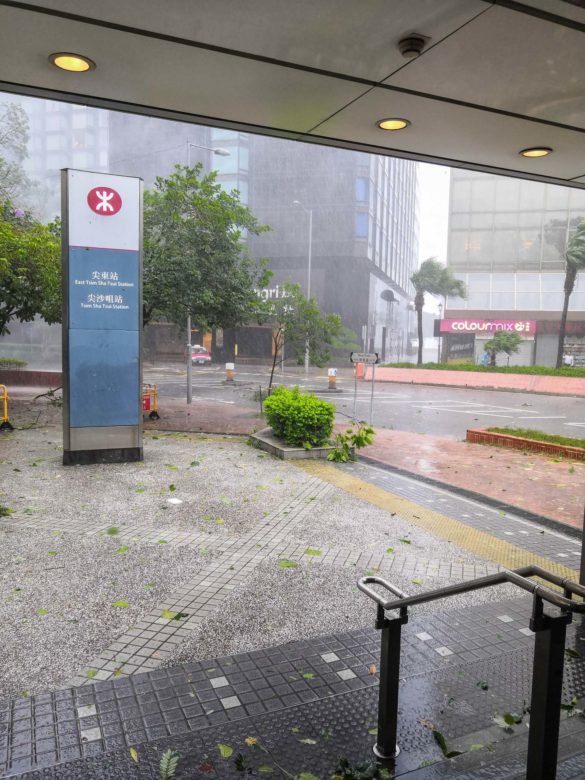 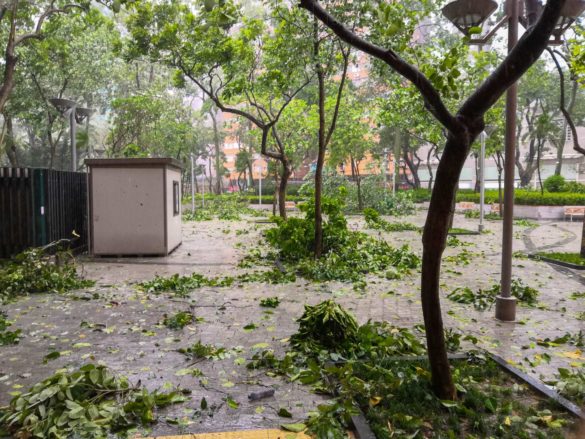 We knew that check-in in Union Guesthouse was not allowed before 3 pm, nevertheless, due to the weather, it was not possible to move later. Fortunately, the door code was in our booking confirmation. So we could at least drop off our luggage and ourselves in a narrow corridor while waiting for the check-in time. Our appreciation belongs to the owner who appeared around 11 am and quickly prepared our room and gave us keys. But before he had to say goodbye to the prior guests, who did not want to leave the safe place. The room was super tiny but cute and even with attached bathroom. Despite the minimal size, there was everything for a comfortable stay. We truly loved it. And it was just slightly more expensive than the dorm before. 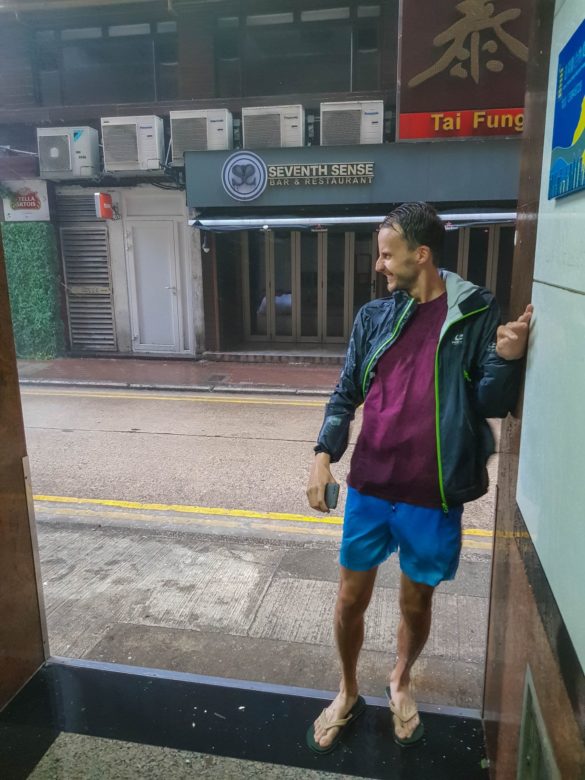 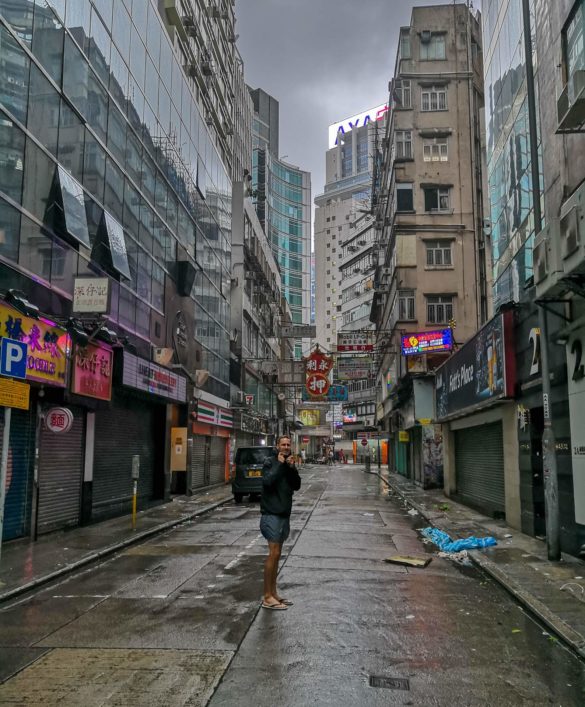 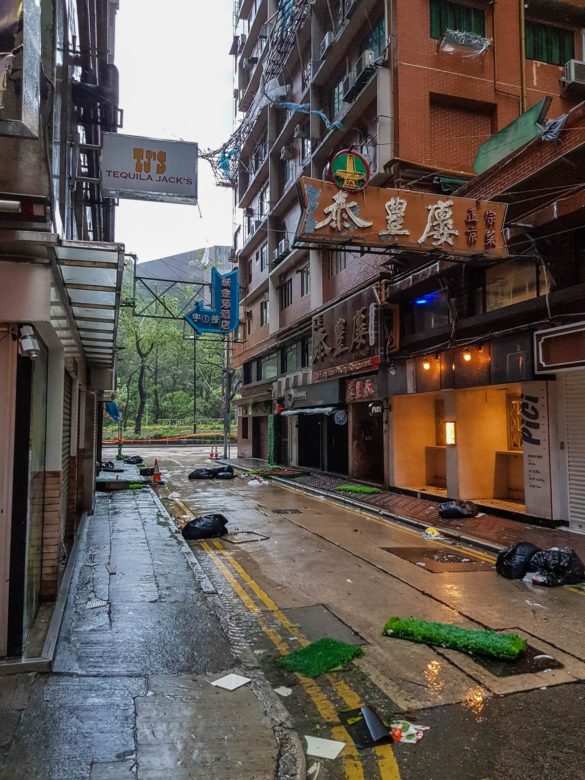 Does it sound weird or cruel if I write that we enjoyed watching the tropical storm when we know how it impacted the city residents lives and there were also certain material damages? However, we also know there were no severe injuries or death reported. It was the first time in our lives to see this – such an intense experience.

We also witnessed capitalism at work. All shops, restaurants, offices etc. were closed that day. There was the only one exception: McDonald’s. Very wise. As per the queue, I would bet they made the best sale in years 🙂

When the rain and wind stopped, during our short walk, the city looked like in an apocalyptic film. Pretty dark, the various thing blew from everywhere scattered on the streets. Just a few people were hanging around like zombies…

Irrespective the typhoon, the next day was just an ordinary day. Everything worked, people went to their jobs. We could barely see any significant damage while heading to the airport.

Along the Li river