I guess we were probably missing long bus rides, so we decided to take 13 hours journey from Chengdu to Litang. The place we heard is a secret Tibet. Despite being Tibet with a majority of the Tibetan population, you don’t need any special permission or guided trip. The area is still in Sichuan but very close to the official Tibet province. We were excited to go there to see the culture and to see how is life in almost 4,000 meters above the sea level. Thanks to its altitude, the city is one of the highest elevated towns or settlements in the world.

I have to admit, the journey there was long and miserable. Driver and other passengers were smoking on the bus. Toilets were mostly old-fashioned Chinese style. It means disgusting, with zero privacy and not for free. Surrounding nature was beautiful but covered by construction of big buildings, highways, and railroads. Even in the Litang, there were entirely new streets and blocks with Chinese style, rather than Tibetan buildings. Genius loci is quickly disappearing as well as traditional Tibetan culture. On top of it, you can also see new police stations and cameras everywhere.

Still, the best memories from China are from here. The place was authentic enough, regardless of ongoing constructions. Just trying 4,000 meters altitude is an experience itself. Even though not a very pleasant one. We had a headache and overly not feeling very good. Unfortunately, we could not stay more than two nights since it was not getting any better, it was even worse. Doing 3,500 meters altitude in one day wasn’t probably wise idea. 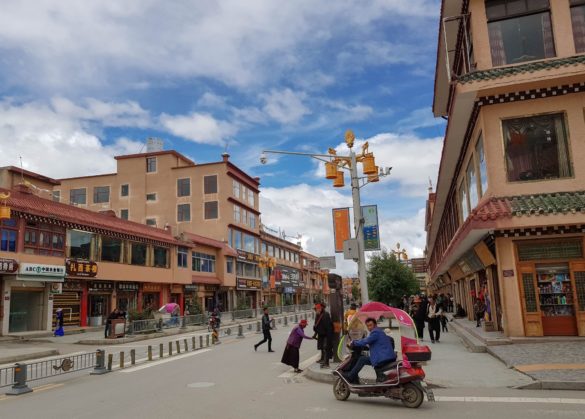 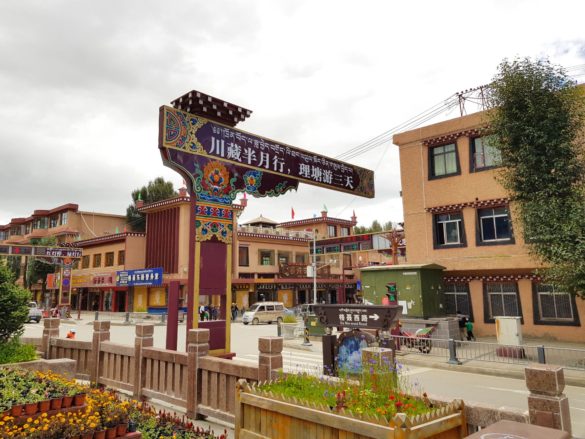 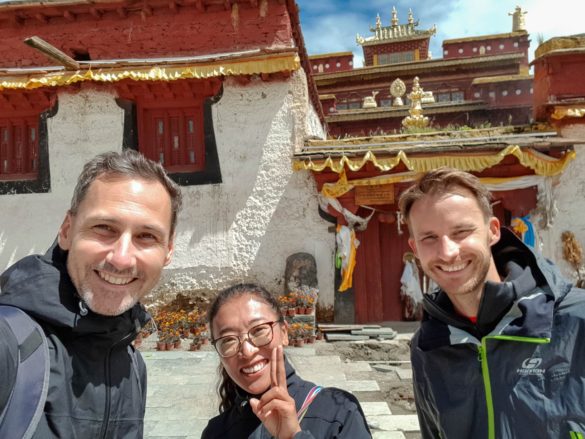 The best part here were truly local people. Smiling, kind and relaxed and on top of that we were unbelievably lucky. First, we met a sympathetic young lady being fluent in English that we had long chat with and learned a lot about the place. Second, the main highlight of entire travel so far – we were invited to a Tibetan wedding! I still cannot believe it. Total strangers. We were curious about music going out from one of the buildings. And suddenly a guy pulled us into the first floor where the wedding party was in full force. We were hosted and treated like being royal. Absolutely fabulous. Bride and groom and their best men beautifully dressed, hundreds of people invited, tables full of food and drinks. Especially yoghurt with sugar and dried yak meat with chilly were delicious. But nothing last forever. After two or three hours we had to thanks to the family and politely disappeared. We could not do more beers, and food and we did not want to misuse their generosity. Also, the language barrier was too big to entertain audience 😉 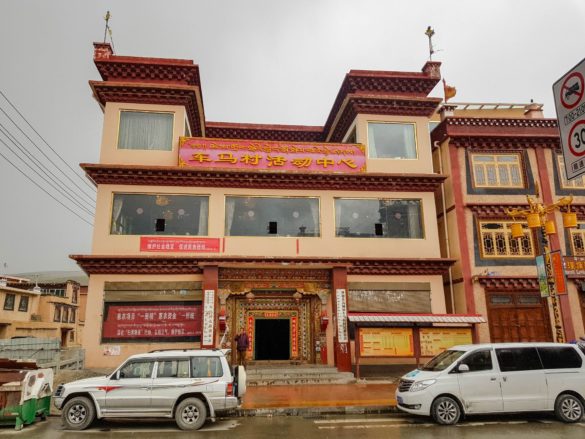 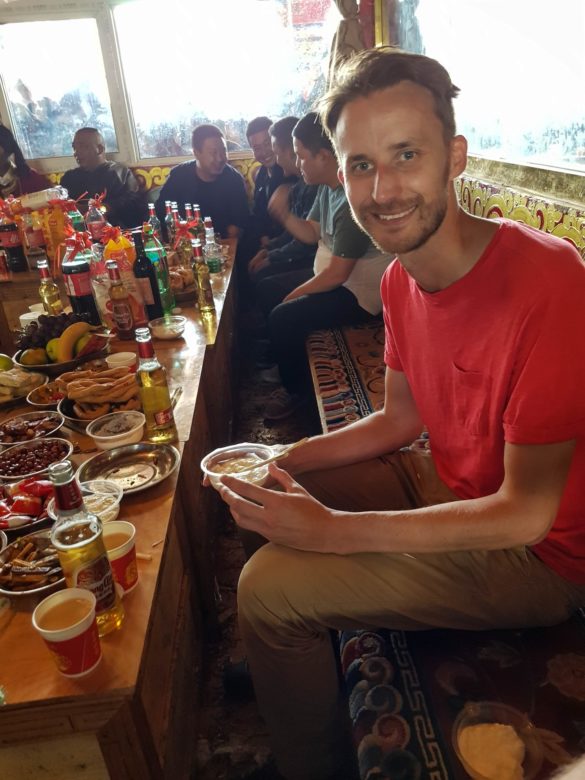 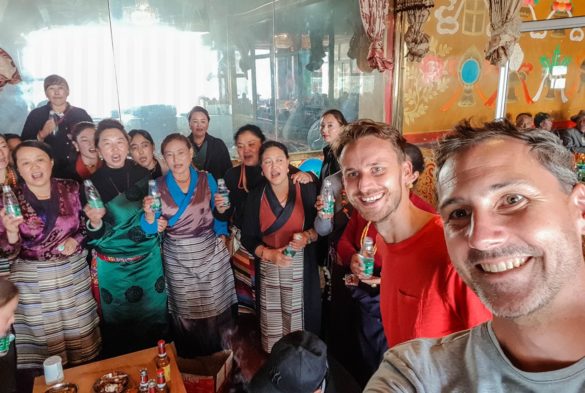 Before and after the party, we visited monastery above the city and shrine with rotating cylinders. Young monks are still having school and their dormitories. Of course equipped with cell phones, motorcycles and eating chips like any other teenagers. We also had a comfortable stay in Potala Inn close to the old bus station for 100 CNY. Honestly, writing the article and looking back at the pictures, this part of the world seems even better. More than ever I regret we did not stay longer. 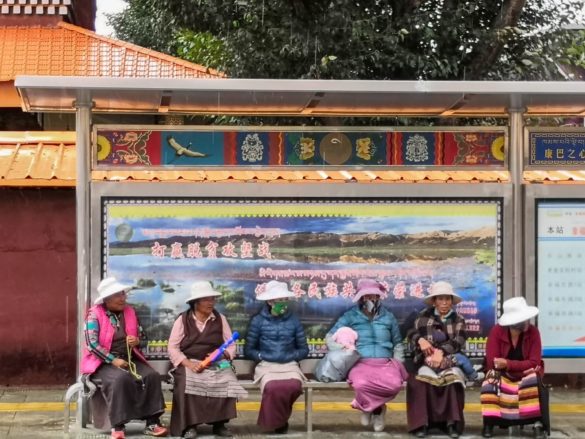 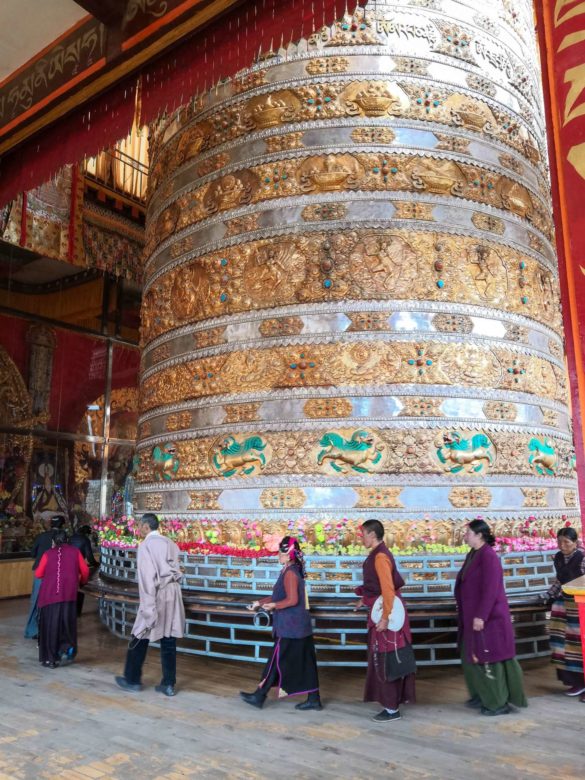 This city is not what we wanted to visit, but we had to since there is no direct connection between Litang and Shangri-La. In the morning, in front of Potala Inn in Litang, we catch a shared van to the Xiangcheng for 100 CNY each. We also got a company from a young Israeli girl we met already in Mongolia (small World) and other three people and spent with them around 5 hours on the road. One-third of the road was old and unpaved, one-third brand new and another one under construction. Therefore the journey should be quite shorter soon. Upon arrival three of us walk the whole city but could not find any hostel to stay, at least not written in English. Once we returned to the bus station, we saw a sign “free Wi-Fi” and “stop” on the building across the street. We correctly translated this as a ”hotel” and got a night for 100 CNY for all of us.

The town itself is very uninteresting. However, there is nice Monastery above it where we hang around, relaxing and also hiding from the rain. Even worth to mention that just after our arrival we bought a bus ticket to Shangrila for the next day at around 80 CNY. Another annoying 7 hours ride. Another day on the road… 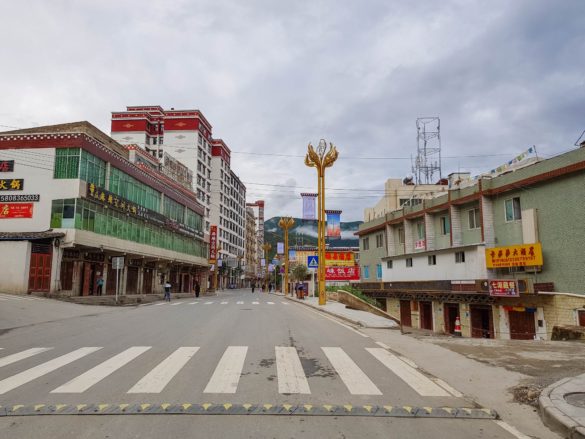 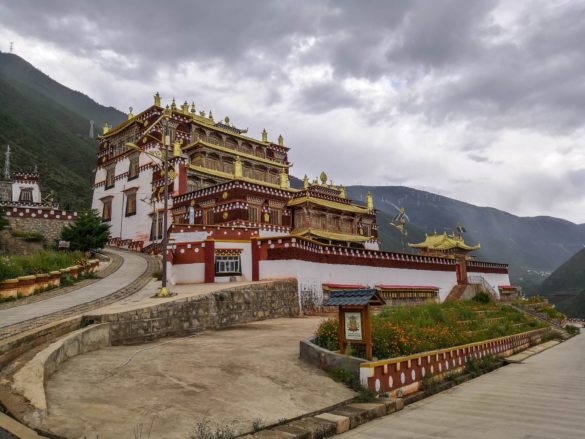 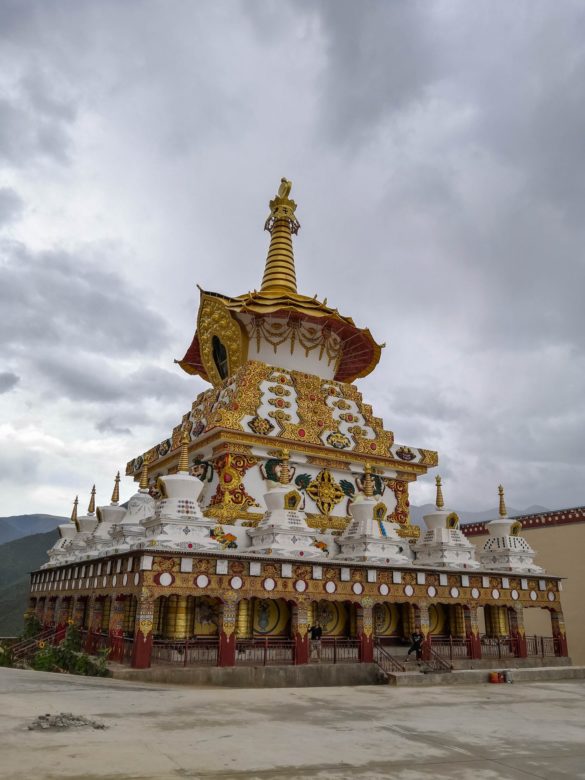 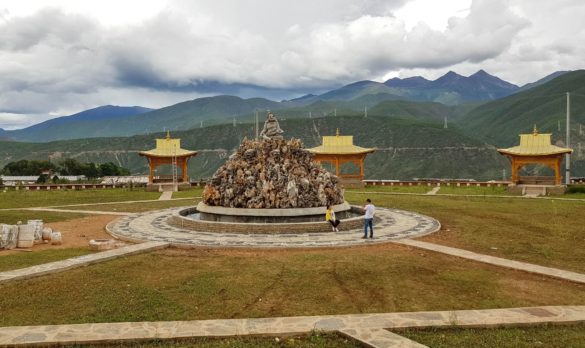 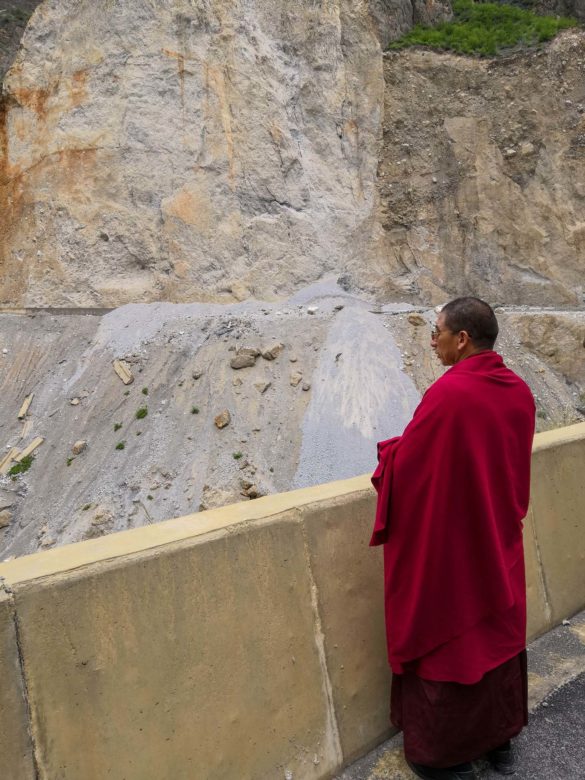 Somebody portrayed us Shangrila as beautiful city and backpackers nest. We have not met any of them there, which is not necessarily a bad thing. Frankly, the city centre is not bad but not overly impressive either and does not have an authentic feeling. It looks more like an artificial tourist city. And I think it is in reality. Newly built wooden houses full of restaurants, cafes and souvenirs shops where we stayed one night in Shangajoy Season Inn (double room 88 CNY). 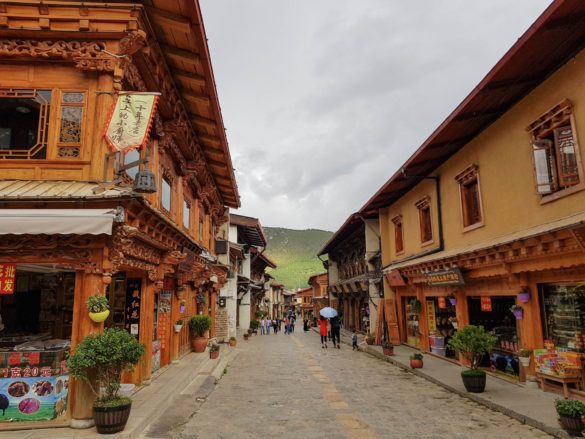 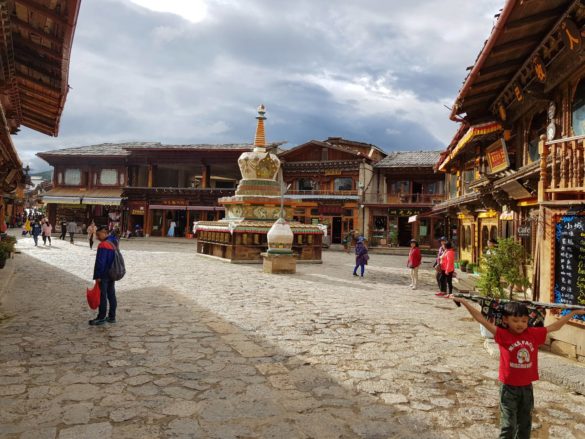 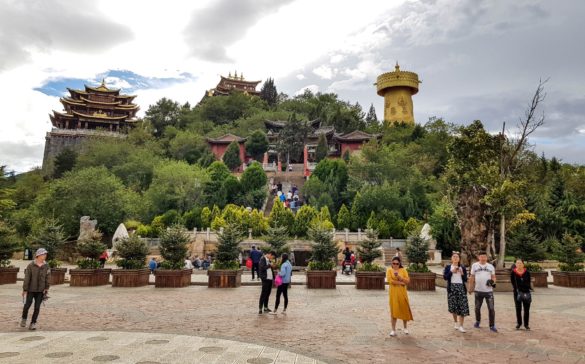 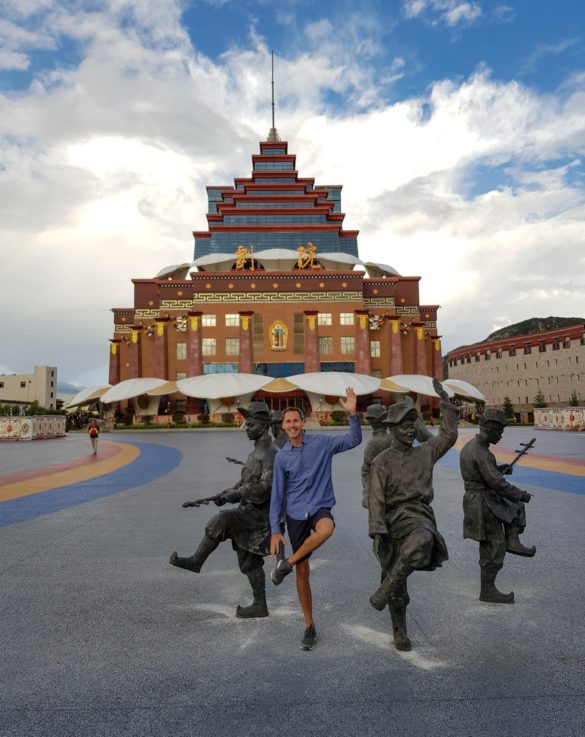 The main highlight of the city is Songzanlin Monastery that looks like the one in Lhasa. If you are curious why you cannot see it in our gallery, the answer is so easy. We have not seen it! The reason is quite simple. We only wanted to make a picture of the monastery before our bus departure. Unfortunately, even to entrance adjacent park, you have to pay 115 CNY fee. Quite a lot of money for a few pictures. We decided to explore the surroundings if we can see it from anywhere without paying. But no way. Don’t forget you are in China where you are not allowed even to see the main attractions from a distance for free. You may think the price isn’t so bad. But consider that cheap lunch in China is 15 CNY. Imagine such ratio in your country… After useless looking for a spot with our backpacks on shoulders, we were too tired to go back to the entrance. We even did not have enough time to visit the monastery due to the bus schedule to our next stop.

Many people say this place is a Disneyland. And we have to agree with them. With hordes of tourists, packed tiny streets and thousands of souvenirs shops it reminded us Prague. But likewise in Prague, if you step aside a little bit, you will find empty streets where you can enjoy a beautifully restored historical centre. So I would definitely give it a chance. We were lucky to stay in Xiangyuan Guesthouse (98 CNY) since it was off the beaten track. 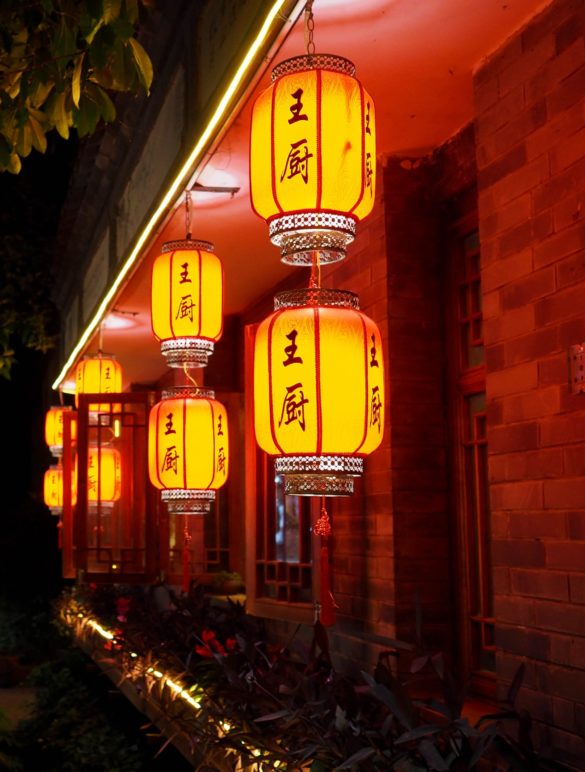 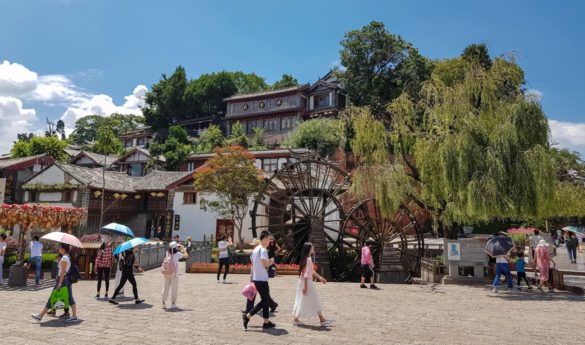 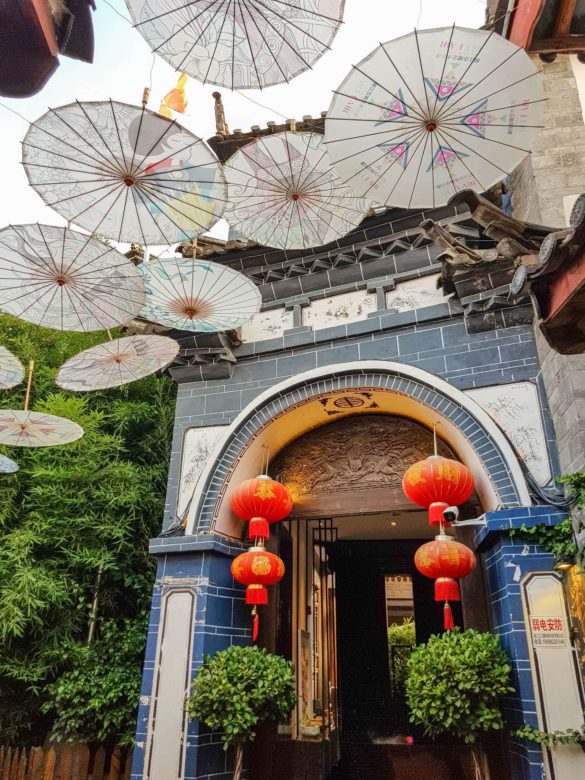 If you want to visit also some parks and temples, again, you have to pay. There is something like a common ticket for the main sights for 80 CNY. However, its use was not clear since you still have to pay extra for specific places. We did not buy the ticket anyway. Instead, we decided to take a public bus to Baisha village. It should be, as we read, a much more authentic place. It turned out to be a very authentic waste of time. If there is not a Baisha Naxi Embroidery Institute, there would be nothing to see apart souvenir shops and cafes. Luckily at least the workshop impressed us. It is also acting social role by training people who had to move from their homes and giving them a way to earn money. 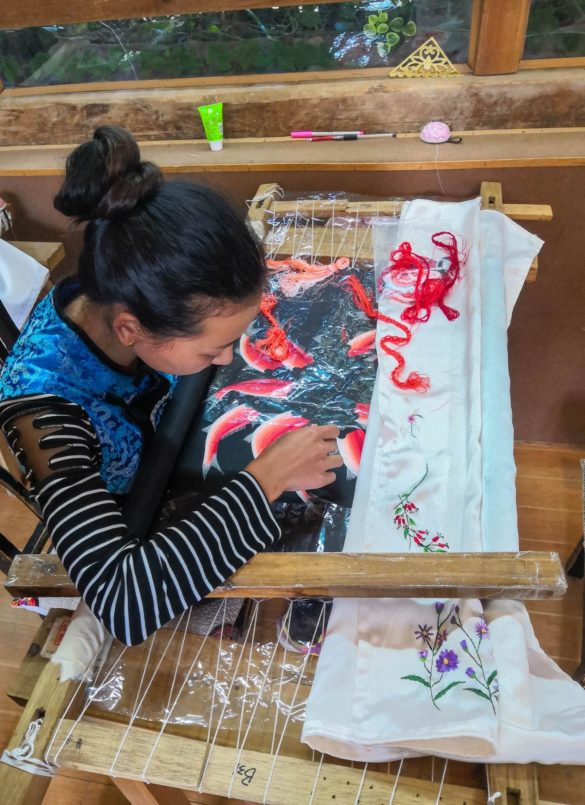