We arrived in Ulaanbaatar’s central train station by in the early morning. There were lots of people offering us accommodation as well as tours to Mongolia’s best attractions. We took a few leaflets just to rid of the bothersome ones a went to our guest-house with a hope to leave our backpacks for afternoon’s check-in. The lady who managed the property was nice so that we could go immediately to our room. It wasn’t as we expected it from the booking site (no private bathroom, only bed as the only amenities, functionless lock and stroboscope instead the light). Since we were quite tired after the long journey and she fixed some issues, we decided to stay.

Read more: Journey from Beijing to Ulaanbaatar via Erlian

After a rest and chat with other guests, we went to explore the neighborhood and grab some food. Our guest-house was in the city center which is quite nice with a bit of western touch. You can find lots of possibilities to eat, to our surprise many Korean restaurants. We love this cuisine, but obviously, we were in Mongolia. But after a few days we found out the main pillar of the local food is mutton with its strong taste and fat pieces, which for us isn’t really favorite meat (Mongolians don’t eat lamb and other young animals). In the countryside, it is usually the only option. Also, veggie soup means vegetable with bits of mutton anyway :). 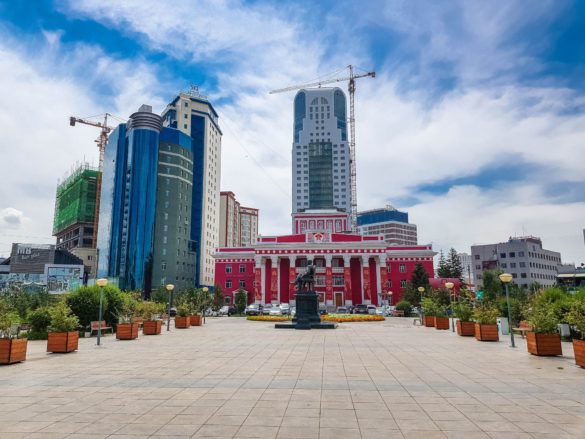 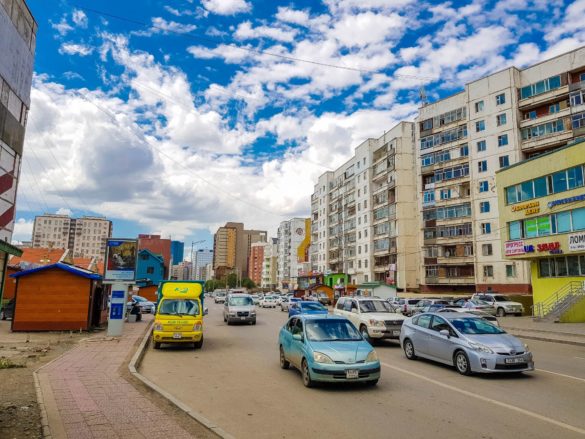 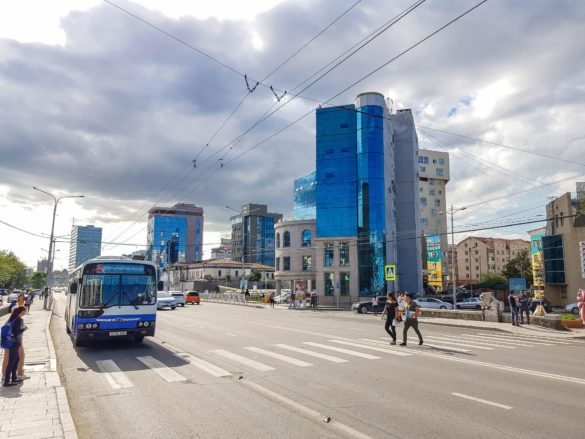 The most important Ulaanbaatar’s street is Peace Avenue, where is heavy traffic all day, especially in the city center. Watch out, local motorists drive a bit crazy, hooting all the time and don’t let you pass on the crossing. The first thing you notice is that the most of the cars have a steering wheel on the right side despite right-hand driving. There is also a huge amount of Toyota Prius cars. Both because of a cheap import from Japan.

Exploring the city is easy as the main attractions are in the city center, so we reached most of them by foot. But for the lazy ones 🙂 there are lots of public buses for 500 MNT a ride. No need to use the city’s U-card. The only issues are timetables in Cyrillic with no departure times listed and lack of English speaking citizens (or even Russian). If you don’t want to hassle with the public transport just wave on the street for a car since any car could be a taxi. There is no meter, but the price is fixed at 1000 MNT per 1 km. As mentioned before the traffic is horrendous and there are not even bus lanes.

The main spot for long-distance transport around Mongolia is Dragon Bus terminal in the western part of the city on Peace Avenue. You can buy tickets at the desk. If you know Cyrillic, you can look up schedules, prices, and availability by using one ticket machines. Some buses departed from smaller terminal called Bayanzurkh (e.g., for Dalanzadgad in the South Gobi aimag / province).

During our five days stay in Ulaanbaatar we visited most of Ulaanbaatar’s main attractions:

The complex of six Buddhist temples completed in 1908 in honor of the State Oracle Lama Lubsanhaidub.  Especially the main temple is lovely and colorful with lots of religious objects like statues, embroideries, and paintings. The property looks closed and also a little bit rundown at first glance (from the outside). However, once you find the entrance on the south side, it is all yours. We were the only visitors and enjoyed the place for just 8000 MNT.

Memorial which honors allied Mongolian and Soviet soldiers killed in World war II.  We took a bus from a bus stop located nearby the UB Library, just behind the KFC on the opposite side of the street. We don’t remember bus numbers but just take one with Zaisan name on it. Zaisan is the last stop. However, you can exit the bus one or two stops earlier. Then you will climb the hill from the back which we realized it was a good choice.  There is a really nice view of the entire city and the new developed Zaisan quarter with a few ger houses. Then we went down more than 600 steps and crossed a bridge to the new and posh shopping mall/office building.

Buddhist monastery with a 26,5-meter high copper golden-plated statue of Avalokiteśvara. Inside the monastery is nice to rest under the trees. 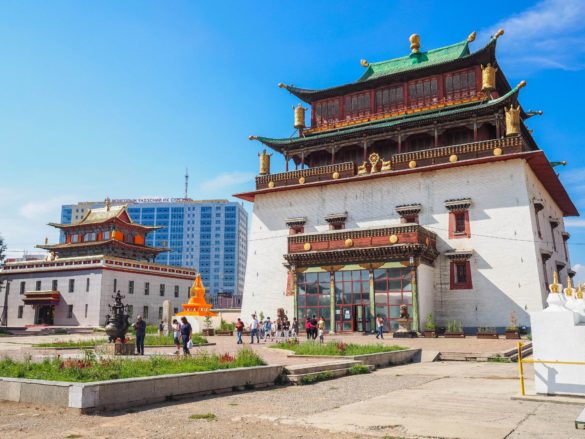 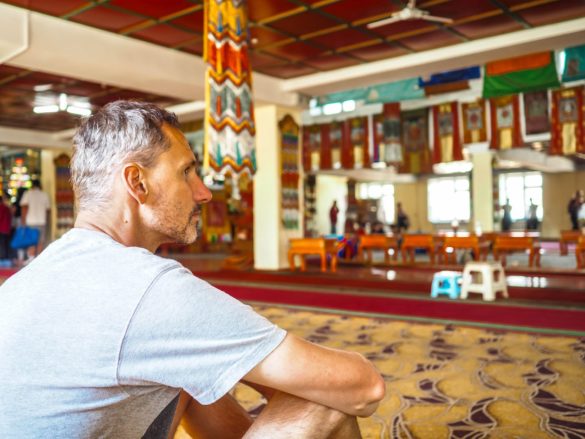 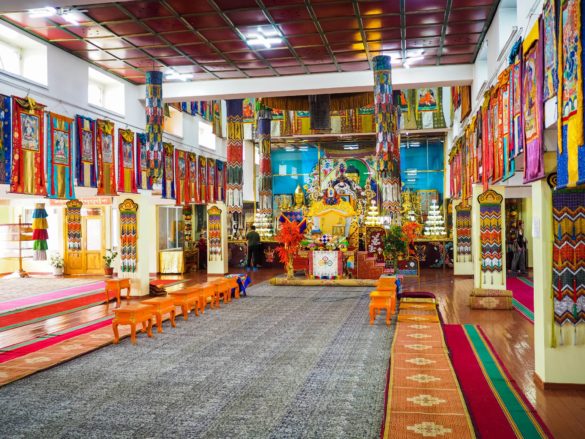 Huge black market with everything you can imagine, but to our disappointment not much Mongolian traditional goods.

The Winter Palace of the Bogd Khan. We found this place accidentally on the way back by foot from the Zaisan Hill.

To our luck, we met in our guest-house a Korean guy who has Mongolian girlfriend, who arranged a trip by a friend’s car to the Chinggis Khan statue complex and Gorkhi-Terelj National Park. Both are not far apart and almost one hour drive east from Ulaanbaatar.

A 40-meter high statue of the biggest ruler of Mongolia on horseback. It’s possible to walk through the sculpture to the horse’s head with a panoramic view. There is also a museum.

A national park with famous Turtle rock. We climbed up, but obviously, the best view is from a distance. We also tried a short horse ride. There are lots of ger camps and opportunities to hike, ride, rest and eat. 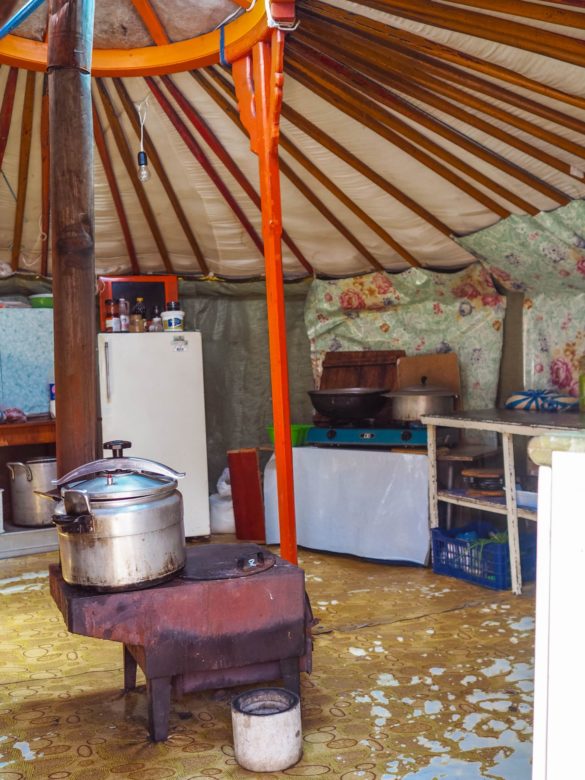 Cheap journey from Beijing to Ulaanbaatar via Erlian

Crystal waters of the Lake Khövsgöl