Being in Kyushu it would be certainly a shame to miss this area full of history and natural beauty. It welcomes the majority of the island visitors for several reasons.  You can find famous Nagasaki city there that can be easily reached by both plane and train. On top of that, nearby Mt. Unzen volcano is roaring for visit. With a car and enough of time, Hirado island is a rewarding and peaceful piece of land. For those wanting more, the trip can be extended for other nearby lures of Kyushu.

Ferry from Shimoshima to Shimabara was a short ride, and we soon appeared in Shimabara city. Surprisingly it had plenty of things and sights to offer. Well preserved ancient street with two restored shogun houses. Shrine with lying Buddha statue, snow white castle. Ponds with golden carps and hot and cold wells scattered through the city. We also tried a local speciality Guzoni (rice cake soup). I am sorry to say that but it was both expensive and not tasty, that is a really rare combination in Japan. 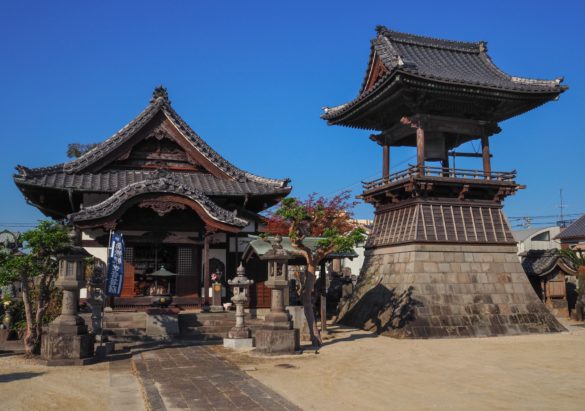 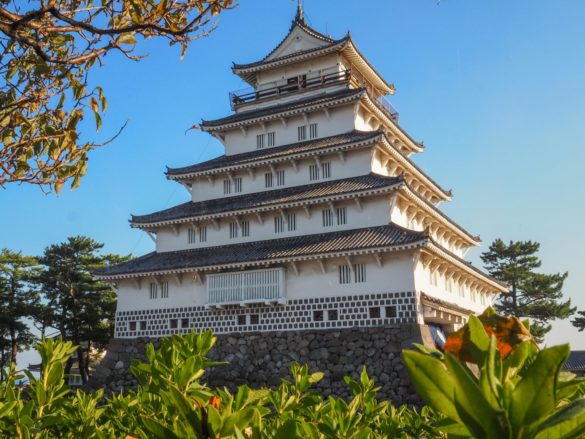 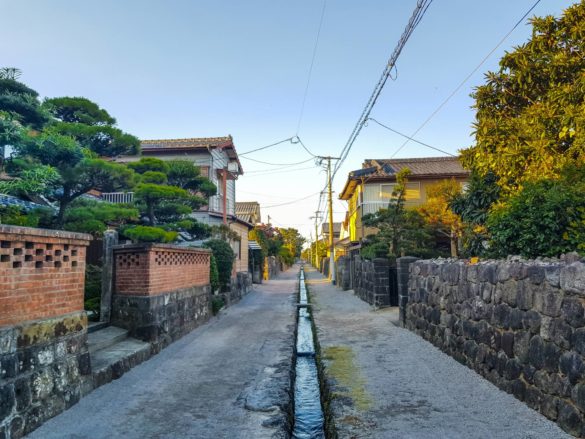 Did we say Japan is full of volcanos? Mt. Unzen in Unzen Amakusa national park it’s just another proof. Still active, which is easy to recognise, as per the smoke coming outside the crater. From the parking lot, you can take either the cable car (not for us) or climb on your feet. At the top of one of the peaks next to the crater, you can also opt for a loop trail. That would be undoubtedly interesting but also difficult. With our super slippery shoes built for city walks, we decided not to risk it. And yes, we were lazy, so shoes were a good excuse. On the other hand, there is a purpose for mentioning shoes. All Mt. Unzen trails were split into sections, and each section had recommended, or minimum requested shoes – doesn’t it sound Japanese? 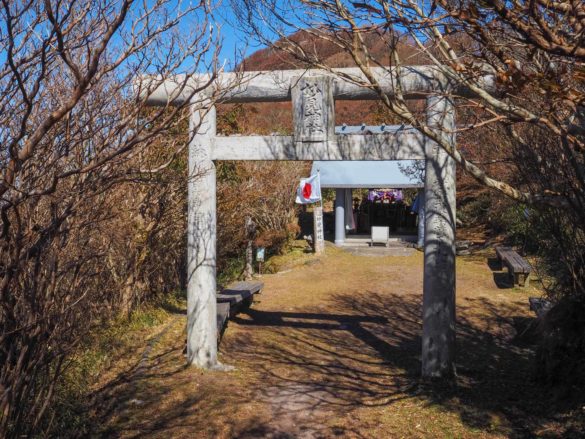 After finishing trail we found Obama city with the longest foot bath in Japan pretty handy. But don’t expect much apart from this main attraction. But you can buy and cook your lunch directly in the hot spring. Or, with a bit of luck that we had, you can get something for free from locals 🙂 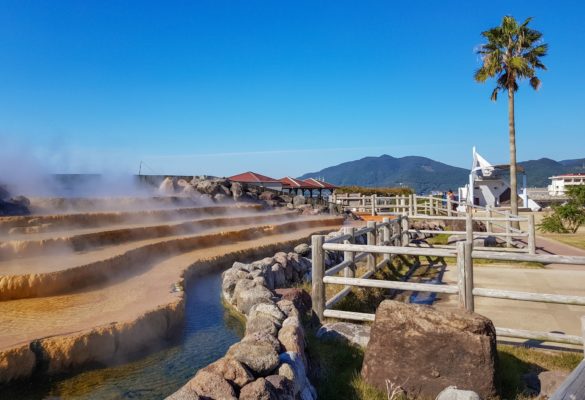 I bet everybody knows the city and its tragic history. We believe this is why most tourists come here. I don’t want to call nuclear memorial and museum as the attraction, it sounds weird. However, it is must-do. In any way, you will feel not any better after seeing all of that. Facts, artefacts and pictures are depressing in the museum; all is well prepared and educative. We had a chance to visit both Nagasaki and Hiroshima and if you want to visit only because of this, go to Hiroshima instead. Memorial park with museum and skeleton of A-Bomb Dome by Czech architect Jan Letzel will touch you more. But as a combination of the museum, parks, few onsens, great food, modern centre and old Dutch and Chinese quarters it makes Nagasaki a perfect city to visit if you are exploring Kyushu’s beauty. 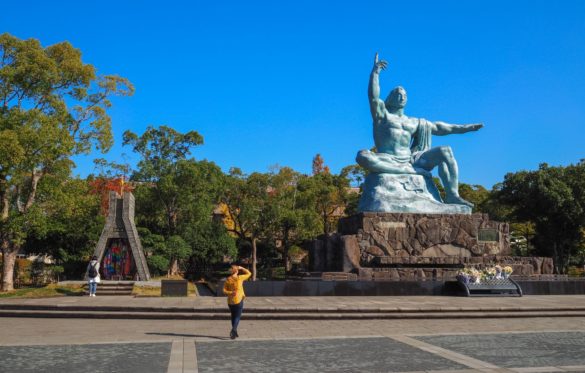 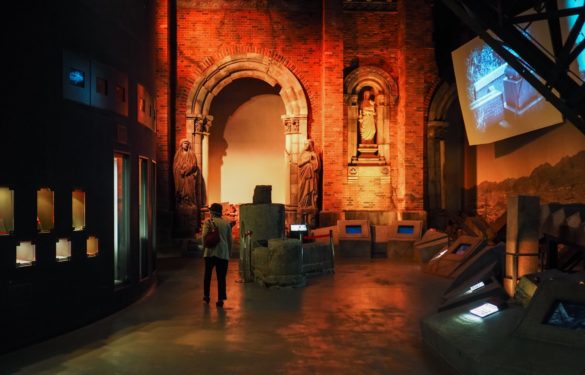 We were quite shocked that a significant part of the city was built in steep hills. Few times I was afraid that our little car would not make it to the top. Seriously. But locals seem to take it easy. In the middle of one of the hill, we saw a driving school. Good luck, even with automatic gearshift…

Looking for a place to sleep gave us a chance to visit Mt. Nabekanmuri Park with an excellent city viewpoint. We learned from locals that it is less known and not visited by tourists. Then our way led to a campground close to Tohakkei park. It was closed, so we slept in the car again.

As per various guides, driving from Nagasaki to Hirado should be pretty much boring without any sights. Which is never true in this country. Passing the Saikai area, we spotted something that must be the biggest tori we’ve ever seen. It would not be us not to decide to explore it. At the end of the road, there was a massive shrine and beautiful Japanese garden with ponds and red bridges. All area was part of Seicho-no-ie Main Temple. We were not successful in googling more details. That was not the only surprise, just a few kilometres later we ended up in vast Dutch fake city settled by a lake, including multiple windmills and plenty of other buildings.

Here we made quite an exception and built the tent for two days in Nakazesogen public campground and being ready to have a full day for Hirado island. The weather was not on our side because of the rain but we had fun anyway. We explored Hirado village with its castle and had an excellent lunch. Then drove to Ikitsuki island with dramatic coast with cliffs and nice beacon. The highlight of the trip was an onsen in Hirado Kaijyo Hotel. At first glance, the hotel looked quite a run down and deserted. But the opposite is true, despite being old, it was quite a fancy hotel with indoor and outdoor onsen. In the indoor section, there was even a big aquarium with fishes, rays and turtles. As the night was closer, the weather becomes even worse with strong wind and heavy rain. We were seriously worried about our cheap tent to be broken or drenched since there was nowhere to hide. Everything ended up well and anyway, we had just one night in front of us before going to Fukuoka and then to Okinawa.